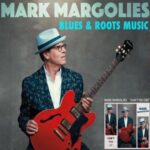 The title track “Can’t You See” is an original composition set to a familiar blues form. The lyrics have a double entendre as many blues songs often do. The eye chart and phoropter which are found on the album cover are part of the mystique. “Doctor Mark” is also a licensed Optometrist.

The other nine songs honor an art form which is deeply rooted in American history, and which touch the soul of many people worldwide. “Can’t You See” has a traditional “old school blues” feel with some modern touches and swinging arrangements.

Note: Carousel will only load on frontend.